Invisible zipper is a small branch of the three major categories of zippers, because the specifications are the same as nylon zippers, and the production method is similar to that of nylon. The production of a complete invisible zipper is mainly divided into die-casting sliders, front production code and rear The three processes are combined into strips. Let's take a closer look at the production process of invisible zipper pullers.
​​
1. Die casting of invisible zipper head.
​​
The slider, also known as the slider, is generally called the slider or the puller in English. , The perfection of the process will affect the density of the slider, and the purity of the zinc alloy will affect its quality.
​​
2. The former process produces the code after the cloth tape and the chain teeth are sewn together.
​​
In the previous process, the yarn is weaved into a single-sided belt by the ribbon loom, the center line and the tooth chain are formed by the forming machine, and the ribbon and the forming are sewed together by the stitching machine to form a long zipper. 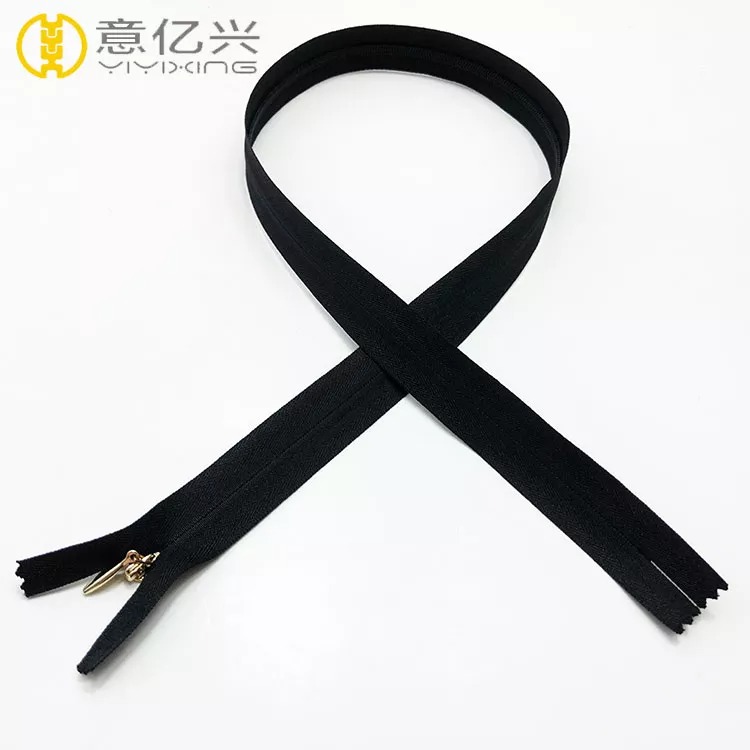 ​​
3. Paint the die-cast slider and dye the stitched yard to produce a strip-mounted invisible zipper.
​​
①. Die-casting is the production of sliders, which can be made in different styles according to different molds. The sliders produced will be colored according to different colors and different process requirements. Generally, there are three processes of spray painting, baking paint and electroplating.
​​
②. The former process produces the code in black or white. If a different color is required, it needs to be dyed by a dyeing factory. If waterproofing is required, a waterproof coating process is required.
​​
3. After spraying and dyeing, the subsequent process can be carried out, which is basically divided into five steps. The first is to set the size according to the requirements, and wash out a part of the tooth chain in the middle of the set size as a mark, usually about 4cm. The second step is to use ultrasonic hot-melt bonding on a section of punched teeth as a backstop. The third step is to install the puller on the chain with the bottom end, generally using a puller machine, or manually threading the head. The fourth step is to make the front sizing of the chain with the slider on, which can prevent the slider from falling off. After the current sizing is completed, it can be cut off, and then the sorting, packaging and quality inspection process can be carried out.
​​
Generally speaking, the production method of invisible zipper is to produce the zipper head and tape code, and then generate the strip zipper through the subsequent process. The intermediate process and color selection can be negotiated and deployed according to requirements.

prev: Which is better, invisible z... next: How to distinguish true and ...